The Days of Anna Madrigal: A Novel (Tales of the City) by Armistead Maupin 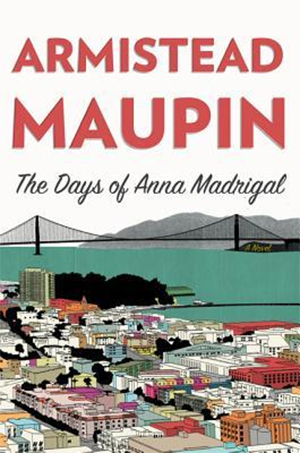 Anna Madrigal is 92 years old. She has moments of forgetfulness. She sleeps more than she used to, and she has unspecified aches and pains that with the aid of her friends, she eases with medical marijuana. She is aware that her death is coming soon and she’s set on “leaving like a lady.” The Days of Anna Madrigal unravels her story between the past and the present. Every character in the novel is focused on Anna Madrigal in some way. As Armistead Maupin weaves the story, he uncovers how each character is linked to her life, and through that, to each other.

“Jake was silent for a moment. “How long have you had that thing?” ||He meant the book. She ran her palm across it, as if comforting an old cur. “Since before I was me,” she said. She lifted the book to her nose and inhaled the scent lingering in its cardboard bones: a hint of rosewater and Lysol that instantly genie-summoned the Blue Moon Lodge. It was Winnemucca condensed, this book, the only thing she owned that could still predictably take her from her to there.”

The characters span the generations from 20-somethings on up, and their diversity does not stop at age; they represent many sexual-orientations and gender-identities as well. Among these characters, there is no prejudice and no discrimination, but Anna’s story reveals that this was not always the case. Her story and theirs unfolds gently and naturally as Maupin creates a world rich with complex, colorful and lively characters operating in places as diverse as Winnemucca, San Francisco and Burning Man’s Black Rock City. He addresses the questions of what makes a family and how to face responsibilities with a good balance of seriousness and laugh-out-loud humor.