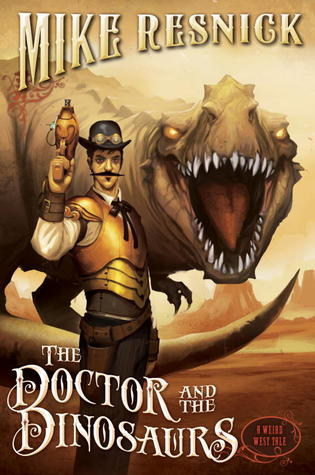 Mike Resnick’s The Doctor and the Dinosaurs follows Doc Holiday and Theodore Roosevelt as they try to convince the stubborn professor’s Cope and Marsh to dig for dinosaur bones elsewhere as the Comanche are not too thrilled at having their sacred burial ground defiled. If Cope and Marsh cannot be convinced to leave, the Comanche will begin resurrecting the ancient monsters to which the bones belong.

While some readers may enjoy reading about Doc Holiday and Theodore Roosevelt wrangling with dinosaurs, or any book involving dinosaurs for that matter, The Doctor and the Dinosaurs falls flat. The book is overly saturated with historical figures with the ten major characters being familiar faces from history books. This unfortunately distracts from the main storyline, which is weak at best. While the goal for Doc Holiday was to stop Cope and Marsh from digging before the dinosaurs were resurrected, he didn’t even make an attempt until long afterwards. The book is also supposed to take place in a steampunk universe. Sadly, there are only two brief mentions of anything related to that genre which may be a huge disappointment for readers attracted to this book for that reason. This is a fast, fluff piece of science fiction/fantasy that doesn’t have a lot of substance.