The King’s Hound by Martin Jensen, translated by Tara Chace 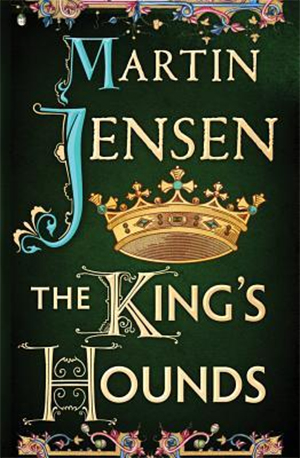 Oxford, 1018 – teeming with the elite members of the conquering Danes and the native Saxons, assembled by the new Danish King of England Cnut to decide upon the country’s future – would be a disastrous site for a murder…and thus an excellent setting for a murder mystery. When a Saxon noble and former enemy of Cnut’s is found stabbed in The King’s Hounds, Cnut’s fragile peace threatens to rupture. Charged with averting such crisis are the titular “king’s hounds,” the impulsive ex-nobleman Halfdan and the wily former monk Winston.

“…now a man has been murdered, a man you all know was my enemy. Not killed honorably in battle but murdered in secret and dumped in a back-alley shed like an old dog. Do you think the men who are supposed to meet and secure the peace in England can trust one another as long as this murder remains unsolved?”

That this does not make much sense is lost in the fun of it. Halfdan and Winston make an appealingly odd couple, possessing the irritably affectionate banter of any crime-solving pair worth a story. (Their ‘meet-cute’ happens when Halfdan, planning to murder and rob Winston, instead defends him against another trying to do the same.) This is the first English translation for Danish novelist Martin Jensen, already popular in his home country, and the first of a series starring Halfdan and Winston (the second novel is also available in English). Jensen makes full use of the rattled atmosphere of eleventh-century England, undergoing an uncomfortable cultural makeover after centuries of Viking invasions, though he does so with a levity that firmly makes historicity a lesser priority. The King’s Hounds is a trifling historical pleasure, but a welcome one.