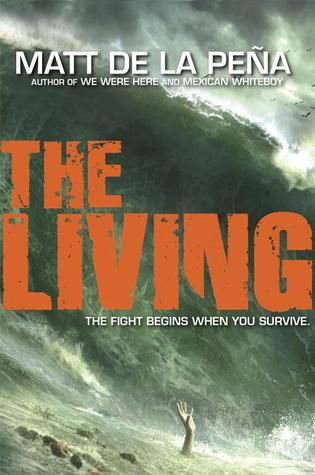 Once your youngster is through reading The Living, go grab it!  Middle-schoolers on up will be held captive when the calm and romantic opening morphs into a terrific yarn of danger and daring. Shy takes a summer job on a cruise ship and the second time out he falls for Carmen who, like him, is half-Mexican, a relevant element in the story. As the ship reaches mid-ocean the captain warns of a super-storm headed their way, a murderous black cloud racing toward them, the aftermath of the Big One, the long-awaited west coast earthquake. A series of tsunamis kills passengers and crew, destroys lifeboats, and causes total havoc. For days Shy clings to a raft with a dying man and a bratty passenger who become almost a romantic challenge. Interwoven, how to explain the lethal infection spreading along on the California-Mexican border? And the storm, the romance, the infection, and a highly sinister element come together along with the last minute rescue.

The hero’s name is Sh; which is too easily read as She. Ignoring this minor flaw, The Living keeps up a cracking pace with empathy for the way teens think, act, and speak.