The Making of The Hitch-Hiker Illustrated by Mary Ann Anderson 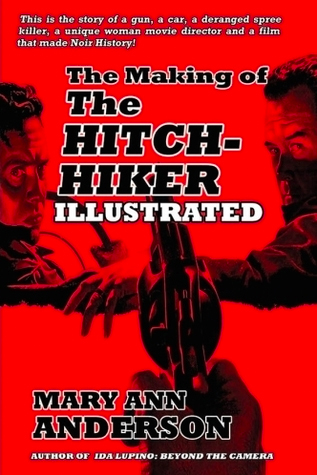 According to this book, The Hitch-Hiker is classified as among the best movies in suspense melodrama and is considered the first film directed by a woman. Ida Lupino was a British-American actress who directed a profound amount of TV and movies. She was well known for her feminist stance in her films, portraying men as heathens and dubious psychopaths and covering topics most directing considered to be to edgy, like rape, unwed motherhood, and bigamy, just to name a few. These films were later known as “Lupino Noir.” Facing issues with the FBI, the Motion Picture Association and obtaining authorization to film, they had to change aspects of the screenplay The Hitch-Hiker was based on as it was about a current murderer sitting on death row and was just to recent of an event to be putting on the big screen.

“Ida Lupino and Collier Young could produce pictures of greater importance and impact by bringing power and excitement to the screen.”

While a very quick read, this book packs a punch and I was entirely enthralled throughout the book. Noir is a genre that has its own following, but hasn’t come around yet like comic book stories have. This book could easily influence the genre a bit. As the book is so thin, the full price of the book might be a little high. However, if film is your niche, it will be well worth it!