The One-Eyed Man: A Fugue, With Winds and Accompaniment by L.E. Modesitt, Jr. 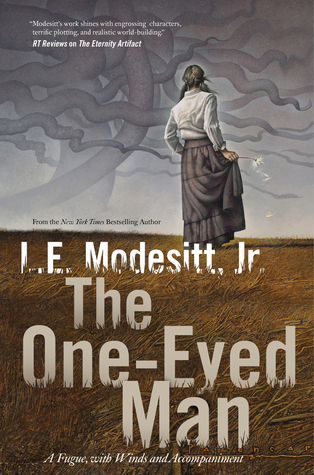 After the dissolution of his civil union leaves Dr. Paulo Verano with five percent of his former assets, he jumps at the chance to get off planet and far away from his personal problems. Accepting the job as a freelance consultant for the Unity, Paulo travels to Stittara in order to assess the ecological impact of the human presence on the planet. Stittara is the mysterious planet on which the Unity creates successful anagathics – drugs that extend the human lifecycle. Floating above the surface of the planet are giant purple skytubes, centers of massive storms that ravage the planet’s surface. Despite the advanced technology available, no one has managed to figure out what exactly the skytubes are. What begins as a simple survey mission becomes much more complicated when attempts are made on Paulo’s life, suggesting he is close to learning what powerful entities want to keep buried.

“The way in which he said that told me that he was just as blind, in a different way, as the Planetary Council, and I was a stumbling, one-eyed man, indeed, trying to see a way clear of catastrophe.”

The One-Eyed Man isn’t your typical science fiction novel. There are no space battles, and our hero isn’t a trained super agent. Paulo is an incredibly normal, and sometimes boring character. He is the perfect lens through which to view the bizarre world and customs on Stittara. The charm of the book is in the well-crafted setting, and the veil of secrecy thrown over every aspect of the planet. The pacing is slow, and the focus on Paulo’s measurement taking and report writing is a departure from L.E. Modesitt, Jr.’s usual style. The One-Eyed Man is a great book for science fiction readers who enjoy a complicated novel, and don’t mind taking their time.