The Osiris Curse: A Tweed & Nightingale Adventure by Paul Crilley 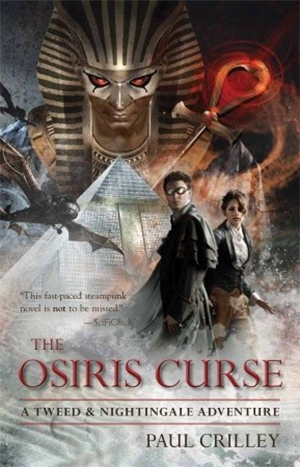 The second book in a series The Osiris Curse is a fast-paced Young Adult steampunk adventure. The narrative follows Tweed and Nightingale, two seventeen-year-old kids who solve crimes but soon find themselves in over their heads. After following a suspicious character who may be tied to Nightingale’s missing mother, the two land in the middle of a conspiracy involving a forgotten history of Egypt one side is desperately trying to cover up, and the other is attempting expose to the world in a violent and explosive way.

The plot of The Osiris Curse is interesting, but relies heavily on the reader’s knowledge of The Lazarus Machine, the first book in the series. The characters are quirky – Tweed’s soul originally belonged to one Sherlock Holmes – and the steampunk elements of the world are well-written and feel like an intrinsic part of the world, rather than tacked on at the end. Fans of The Lazarus Machine will most likely enjoy the continued adventures of Tweed and Nightingale in The Osiris Curse.