The Planning Game: Lessons from Great Cities by Alexander Garvin 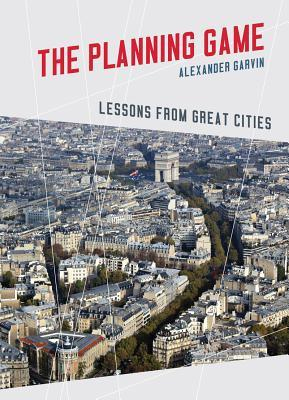 Alexander Garvin introduced an urban planning game in his classroom and taught students the fine art of planning and its consequences. The Planning Game is the result of 40 years of practicing and teaching the planning process. Garvin reviews the many players that are a part of the planning process, as well as, the economic and political rules that dictate the development process. He then devotes a chapter each to four cities: Paris, Chicago, New York and Philadelphia. Garvin’s focus is on the public realm of planning, especially the importance of public investment. He contends that public investment is good for the city’s residents and workers to ensure private investment will follow. 19th century Paris and 20th century Chicago planned and changed to ensure the economy and the inhabitants could benefit. New York planning was geared towards being prepared for unprecedented growth and Philadelphia wanted to plan for both urban and suburban growth. It cannot go unnoticed, though, that often many people were displaced in order to create the parks, wider streets and highways.

It was fascinating to read how these four cities evolved with both careful, detailed planning, as well as, some sheer luck. But without a doubt, thoughtful change did happen to perhaps once-believable unchangeable areas. There are over 200 photos, maps and diagrams that Garvin explains as he shares the history of the evolution of these amazing cities.