The Queen’s Dwarf: A Novel by Ella March Chase 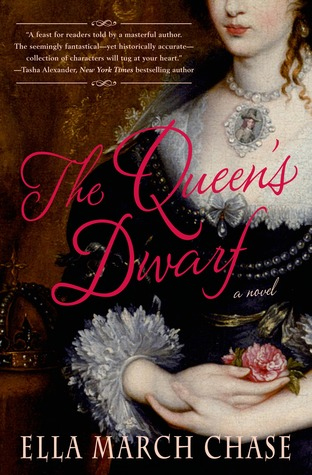 Historical fiction focused on a king’s court is wildly popular, and Chase explores the Stuart court in her book The Queen’s Dwarf. Jeffery Hudson (aka Lord Minimus) is a dwarf sold to the Duke of Buckingham by his father. Buckingham presents Hudson as a gift to King Charles I’s French Queen Henrietta-Maria. Hudson is disguised as a gift, but he is actually a spy. The Queen is depressed, lonely and meek and she quickly attaches herself to Hudson. Hudson, a part of the “Royal Menagerie of Freaks and Curiosities of Nature,” is constantly threatened by Buckingham; if he fails to collect intelligence, his brother Samuel will suffer. Although Hudson tries not to like the queen, he finds it more and more difficult as time goes on.

Chase’s book offers vividly realistic details about daily court life, as well as insight into the intrigue and deception that was prevalent in the kingdom. There are a dizzying number of characters though, and it took this reviewer a while to figure out who was who in order to follow the storyline. Nonetheless, if one is mesmerized by a distant time filled with plot twists and turns, this is a book worth picking up.