The Terminals: Spark by Michael Stewart 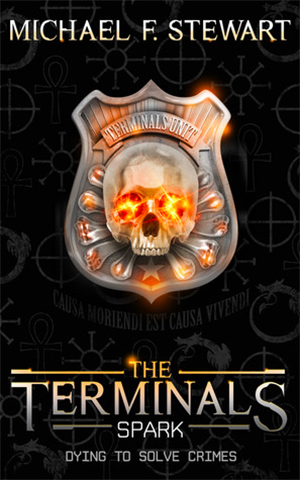 In the line of duty some soldiers must make the ultimate sacrifice. But in Michael F. Stewart’s supernatural thriller The Terminals Episode 1: Spark, death is just the beginning. Stewart takes the reader into a covert military operation that uses information gathered from the dead to protect the living. In this first installment, Lt. Col. Christine Kurzow, who is suicidal after the deaths of eleven of her men, is convinced to stay alive while she and a deceased monk track a psychotic killer through seven different hells to find the location of the bus-load of children he abducted. It’s a unique premise, equal parts murder mystery and philosophical musing, that manages to stay just this side of absurd.

Perhaps the most interesting part of the book is the way that Stewart renders the many different afterlives that the Terminals explore, each a fully-realized depiction of a different religion and mythology. From an encounter with the Egyptian god Anubis to battles against ancient, nameless demons, the chapters set in hell are intriguing and action-packed while still raising deep questions about life, death and what comes next.

The real-world chapters, on the other hand, keep the plot grounded. While Lt. Col. Kurzow searches for the children, she uncovers the secrets surrounding the Terminals and grapples with her own guilt, pain and mistrust.

The Terminals, while occasionally funny and light-hearted, is overall pretty dark. There’s violence, cursing, and a cast of characters so tragic that it makes the story’s suicidal protagonist seem almost hopeful. And that’s really the strength of this book: It brings you down to the depths of hell and then provides a glimmer of hope that all that misery and pain might serve a greater purpose.