Who Discovered America?: The Untold History of the Peopling of the Americas by Gavin Menzies & Ian Hudson 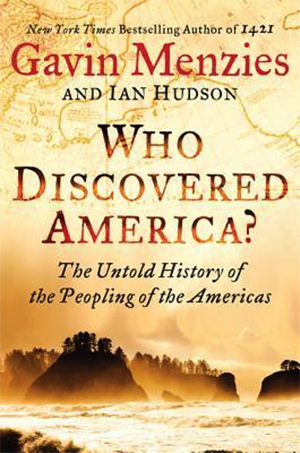 Who Discovered America reads like a text on how not to do history. It butchers logic and common sense, and makes staggering, thinly supported claims, including: humans reached the Americas forty thousand years ago, not by the Bering Land Bridge but by sea; the Olmec civilization was jump-started by the Chinese, who also founded huge settlements on the eastern US seaboard; Marco Polo explored Hudson Bay; and Kublai Kahn’s fleets reached Antarctica. Proof of these claims relies on conclusions suggested by rhetorical questions; leaps of logic and argumentative fallacies such as appeals to false authority; the selective use of evidence; the dismissal of competing ideas, possibilities, theories, and evidence; and a shameful over-reliance on coincidence and cultural commonalities.

Who Discovered America assumes the reader is familiar with the author’s previous work, and so it states its case lazily and cavalierly, reading at times like a dull travelogue of the author’s holidays in the Americas and Asia (ostensibly, research trips), and at other times like an adolescent defense against real and imagined criticism. Because the book doesn’t take its subject matter seriously, readers shouldn’t either, and are advised to steer clear.