A Giraffe and a Half 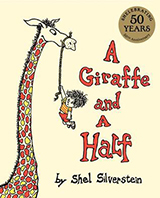 A Giraffe and a Half shares Silverstein’s signature style with classic line drawings and rhymed lines sure to please. This book for young readers has entertained for five decades and the 50th anniversary edition promises to carry on the laughter into the next generation.

Early readers will appreciate the simple language that takes a funny spin with compounded rhyme creations. First we have a giraffe, then a giraffe and a half, until imaginative what-if scenarios of rats in hats, roses on noses, and snakes eating cakes turn this tale into a winding road of hilarity. With each rhymed addition, the narration adds humor amid language play making this a build-up and wind-down tale of fun as illustrations detail every twist and turn.

A Giraffe and a Half was originally published in 1964 and yet the story remains as fresh as ever, encouraging imagination and rhyme play for kids and adults alike.