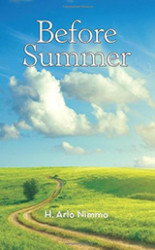 In a time when fantasy and cyberspace rule millions of 21st-century folks, anthropologist and writer H. Arlo Nimmo gives us a book of stories that is as real as life and as admirable as love. The sixteen stories in Before Summer let readers into lead character Lach MacLennan’s life as he grows up in the small town of Tools Rock, Iowa in the mid 20th-century while learning about his own homosexuality. Nimmo’s stories, narrated in first person in Lach’s voice, depict a portrait of the rather simple and fairly peaceful country life in the United States during the 1940s and 50s. In addition to learning about Lach, readers will meet a number of other interesting and sometimes “strange” characters, each revealing a strong inspirational side. The sections that stand out most in Lach’s accounts are the interactions he has with older characters like Old Fred, Miss Cotters, and Mr. Fraser – people who have shared or inspired Lach’s lasting passion for books, education, writing and living a harmless and peaceful life.

“Everybody’s strange but me and thee, and sometimes I wonder about thee.”

Most stories in Before Summer have a serious and nostalgic tone. But Nimmo also incorporates humor into the tales. For example, in the story “Rain,” Lach is tired of hearing about the small farming town kind of obsessive attention paid to rain. Like all the stories in the book, its ending makes an impact. From the first page to the last one, as in a domino structure, each story supports the beginning of a new one. With Lach, readers keep growing up in virtual time.

Nimmo’s stories are beautifully written and charming. His writing style, with its concise and non-affected language, creates stories that rest on the border between fiction and non-fiction/memoir. Not a thriller in the conventional sense, the book is no less than a page-turner. Will Lach accept his sexuality and gain clarity about his own identity? Will Lach say farewell to Tools Rock? The final story “Summer” concludes Lach’s journey very cathartically, much like a classic. These stories are for anyone who loves good literature and wants to see the way the written word is skillfully handled by a talented author.