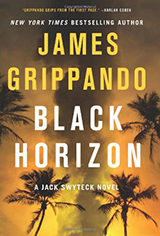 Just married, Jack Swyteck and Andie Henning were honeymooning in the Florida Keys when they were shocked to hear on the news that there had been another disaster with an oil rig and the spill was heading straight for the Keys. Soon after, Andie, an undercover FBI agent, was called away for a new assignment. Within a short time, Jack became embroiled in a case involving the widow of one of the workers from the oil rig. Complicated by the fact that the rig was in Cuban waters, and owned by an uncooperative foreign consortium of the Chinese, Venezuelan, and Russian governments, the case became more complex and dangerous than Jack had ever imagined. Jack and his friend Theo begin to suspect that the oil rig disaster was not an accident at all, but sabotage. When an unknown person demanded millions of dollars for proof that the oil rig failure was the result of sabotage, the U.S. government became involved as well.

Grippando has once again created an immensely enjoyable saga involving the charming Jack Switeck. Riddled with adventure, mystery, and peril, the story is also sprinkled with humor. Black Horizon is engrossing and entertaining with surprises throughout.