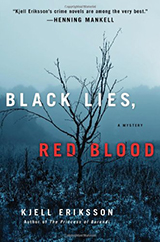 “It can never be really good, never uncomplicated,” sighs Police Inspector Ann Lindell towards the start of Black Lies, Red Blood. Though she bemoans her new lover, who has disappeared right as police find his phone number in the pocket of a murdered homeless man, the sentiment could just as well be expressed by any of the gloomy police force.

“The true story would tear everything apart, the politicians’ talk and all the empty words. Behind every crime is greed and the imperfection of our society, people’s anxiety. …Away with the fine words, the lies in the newspapers!”

This is the fifth book in Eriksson’s series surrounding Lindell, the first installment of which won the Swedish Crime Writers’ Academy Best Swedish Crime Novel Award in 2002. Although Black Lies, Red Blood contains several escalating mysteries, Eriksson is less concerned with their solving and more with the impact such crime has on the minds of the police, and with the effect their personal struggles have on their work. Mixed in with efforts to solve the case are worries about lost vacation time, broken relationships, alcoholism, and depression.

Eriksson clearly aims to dispel the mystique of investigators, and to emphasize both the laboriousness and the complexity of solving crimes. His plot is at service to this point. Much of the drama turns upon an unlikely coincidence that stretches credulity, though other aspects are much more satisfying. At times Eriksson’s philosophizing becomes unwelcomingly didactic, but Black Lies, Red Blood is rich with humanity, and is a thought-provoking, though not thrilling, read.