Blood and Iron: The Book of the Black Earth 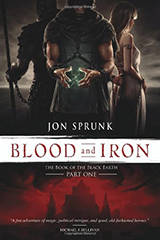 Jon Sprunk’s fantasy epic Blood and Iron begins with Horace, a soldier from the west who is shipwrecked on enemy soil. Not knowing the language or culture, Horace finds himself captured as a slave – until his latent magic abilities make themselves known. Thrust into the very heart of the queen’s court, he must learn to navigate the extremely complicated political system if he wishes to survive. He is supported by Jirom, an ex-mercenary turned gladiator slave, and Alyra, a foreign spy, who together struggle to free themselves from the oppressive caste system only to discover that the tyrannical queen may not be the worst of their problems.

Blood and Iron is a gritty fantasy novel that doesn’t pull any punches, delving into the less than pleasant details of a society that rests on slavery, and the sometimes extreme brutality of the ruling class. The story is woven between the three main characters, each giving different insight into the world and the tumultuous political tensions of the kingdom. While some characters are better constructed than others, the overall adventure is fast paced and will hook readers from the beginning. Highly recommended for fans of fantasy who enjoy a fair share of political intrigue.