Congo: The Epic History of a People 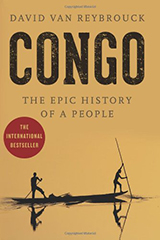 In 1885, King Leopold ll of Belgian took as his personal possession territory that has become the present-day Democratic Republic of Congo. Although he never set foot in Africa, his primary functionary Henry Morton Stanley (immortalized by his apocryphal line, “Dr. Livingstone I presume”), trudged across the land for three years, recording his travails and perceived success. David Van Reybrouck’s epic draws on Stanley’s ventures from multiple sources. Early diaries and oral interviews conducted with Africans and their forbears present a unique and vivid perspective of this period and the colonial years that followed. In the 1880s the European powers simply divided Africa between them. Belgium, newly recognized as an independent nation, took a swathe of land that reached into the continent’s interior, most of it terra incognita.

The term barbaric has to be used carefully to avoid diminishing its meaning, but no better word describes the kidnapping of Africans and their subsequent treatment at the hands of slave traders, colonials, and adversarial tribesmen. The pages step forward into the new millennium by addressing contemporary political upheavals, some inevitable in a region the size of Western Europe, and shared by four hundred ethnic groups speaking numerous languages.

Although intermittently macabre, the 560 – page saga includes more equable periods. It’s an unexpectedly gripping account of a country too often maligned and barely familiar to many readers. I can’t remember a time when I’ve enjoyed a book so much.