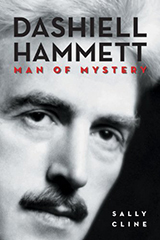 Dashiell Hammett, Man of Mystery by Sally Cline is a fascinating biography from which we gain a clear impression of the author who experienced what could be considered one of the most famous writer’s block in the history of literature. Hammett (1894-1961) is presented as a man’s man who joined the army twice and was more comfortable with his own sex. Being a hard drinker, a womanizer, and a patriot, he further demonstrated a need to prove his masculinity. He was also a philanderer who sometimes preferred prostitutes to relationships. Life, unfortunately, took a hard turn for him when he caught tuberculosis, hepatitis, and gonorrhea.

“In life his perspective was one of cool resignation, an unreachable detachment. But in his fiction, there is also heat, venom and an occasional splinter of resentment. “

Cline has done a lot research to put this short biography together and has probably come to know the man more fully than Lillian Hellman, with whom he had a 30 year affair. Cline prefers Hammett to Hemingway and points out that he elevated the crime novel to the ranks of literature, a status of which one might argue is attained by the top writing in any genre. The book is not without its faults, however. For instance, you may wonder why so much attention is given to the health problems that plagued him. The book may not be initially compelling, but upon completion, you will gain an appreciation for the man.