Death at the Movies: Hollywood’s Guide to the Hereafter 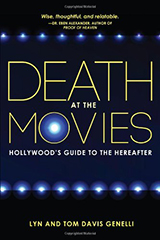 Wisdom For What Lies Beyond

Death at the Movies, Hollywood’s Guide to the Hereafter from Lyn Genelli and Dr. Tom Davis Genelli is a fascinating exploration of the film industries attempt to explore the voyage to afterlife. Most of the films explored are from the last forty years, but there is some attention given to earlier ones. It is fun to be along for this exploration, which is profound due to theological themes. Many quotes are here from Eastern and Western religious figures and philosophers. This is a great book for those who have larger questions with the film industry trying to stay relevant and entertaining.

“The Buddists would say Rick has entered the path of a bodhisattva, someone who is dedicated  to alleviating the suffering of all beings everywhere, putting their realization before his own, even while learning that are ultimately no others (and no self) to be saved . Lazlo acknowledges this transformation and tells Rick, ‘Welcome back to the fight.”

There is not a lot of jargon in the book, but it can sound a little strange. The reviewer also has only seen 11 of the 17 movies that are given significant exploration. Reading about films not seen was interesting anyway. It was also interesting to read about some films that were not seen in a long time. The authors’ favorite film is The Wizard of Oz and they certainly share an appreciation of the medium. This is a great book for those who can’t get someone to read a religious text, but might be willing to see films instead. The focus here is the journey.