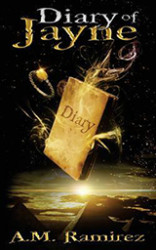 A Pharaoh’s Ring and a Girl’s Diary

The Diary of Jayne by A.M. Ramirez is a young adult adventure novella that records the story of the two hundred and fifteen year old Jayne “Last names aren’t important.” Her parents scoured Egypt at the beginning of the eighteenth century, pioneers in archaeology, bordering on grave robbers. A ring, gifted to Jayne by her father on the occasion of her fifteenth birthday, plays a part in Jayne’s long life. Not much is said about what she’s been up to since her parents died at quite an advanced age, other than that she appreciates the convenience of credit cards and changing identities has grown more difficult. But, at last, she wants to know the origins of this birthday gift and the search will send her back to where her story began, and further.

This is a fast-paced read, very much in the voice of a young girl, which Jayne still is in many ways, despite her long life. It’s an entertaining story and an easy way to pass an afternoon. One can’t help but race along with Jayne, through the libraries and museums, anxious to see what she’ll turn up next.

Readers might have question as to why Jayne has decided to pursue the origins of her ring now, after her parents have been dead for over a hundred years. They might also ask what Jayne has been up to since her parents died. She seems quite naïve and rather unworldly for as long as she’s lived in the world. The motives of her enemies remain murky as well, though this seems promised to be resolved in later books.

“Can it really be possible that I am the only one who has fallen victim to this curse? … Now more than ever I want to find the truth about my curse, for myself and especially for my father.”

Overall, Ramirez has crafted a story full of tension and waiting thrills around every corner. It will likely be enjoyed by young adult readers more than new adult readers. The print book is quite lovely and well-made. It will be a good family summer read and has a Disney-feel-good tone. With pyramids and mummies.