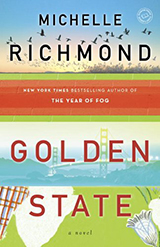 Julie Walker is a doctor at the San Francisco Veterans hospital. While in the process of divorcing her husband, Julie’s past comes back to haunt her. Golden State takes the reader through a day in Julie’s life when everything appears to be falling apart. Between three people close to her being held hostage, a busted ankle, her sister’s child on the way, and a political upset in California, it looks like things in Julie’s life can’t get much worse.

It seems, however, as though Michelle Richmond bit off more than she could chew. Golden State has earned two stars, as it is not entirely boring, but is far from engaging. The structure of this novel is disorganized and difficult to follow, and there are some unresolved issues that distract from the plot. For example, the political riots over California’s bid for independence from the rest of the country are given no background or conclusion. Overall, Golden State gets points for creativity, but loses more for poor execution.