Hard as You Can: A Hard Ink Novel 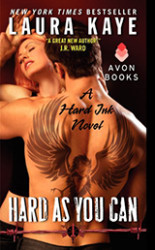 Shane McCallan has lived his life under the burden of misplaced guilt for his sister’s disappearance. Blaming himself for her loss, he had given up on redemption until he met Crystal. Caught between the most violent gang in Baltimore, the Churchmen, and her abusive boyfriend, Crystal is familiar with the crushing weight of indebtedness. When Shane offers her the chance to escape her situation, and to punish the men who forced her into it, she risks everything to provide information that might save other women from a similar fate. When her younger sister is stolen to punish Crystal, only Shane can understand what sacrifices she has made, and only Shane can help save the one person she’d do anything to protect.

Still trying to repair the damage inflicted by their commander’s betrayal, the brothers-in-arms at Hard Ink continue to seek justice for themselves and their fallen teammates. Hard As You Can follows fast on the heels of the series opener, Hard As It Gets. Fans of military romance will appreciate the former-soldier heroes of the series, while mystery and romantic suspense readers will be drawn in by the conspiracy behind the cover-up forcing Shane and his teammates out of the service. Well-crafted, emotionally complicated characters encourage emotional investment as high-speed action and unrelieved tension will keep readers on the edge of their seats.