I Never Met a Story I Didn’t Like: Mostly True Tall Tales 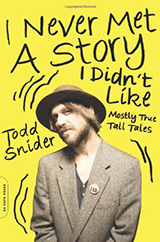 Well-traveled, alternative country singer and songwriter, Todd Snider wrote a lengthy chronicle of his adventures in I Never Met a Story I Didn’t Like: Mostly True Tall Tales. Snider, a suburban from Beaverton, Oregon parted ways with his family’s middle class Republican Party ways for a career as a traveling musician. Snider eventually settled in East Nashville after meeting various idols including Jerry Jeff Walker, Jimmy Buffett, John Prine and Kris Kristoffersen, with whom he made music with along the way. In this book Snider describes Garth Brooks as one of the most honorable figures in the country music industry. Some of funniest parts of the book include little known figures Todd meets along the way, such as, Tony Bennett (not THAT Tony Bennett,) owners of obscure bars in Tennessee and Alaska, a crude drunk who impersonates race car driver, Bill Elliott, and many more.

Through his journey Snider wrecks the occasional hotel room, pals around with country music greats, and manages to destroy his mind and body with pills, alcohol, cocaine, morphine, and his beloved marijuana. At the tail end of the book, Snider is handed what he thinks is a joint by a fan. It turns out to be a mixture of cocaine combined with other drugs which nearly comes close to killing him. As Snider’s journey unfolds, the reader is left wondering how a single individual can possess such a mixture of insight and recklessness. While, at the same time, the reader can look over a number of Snider’s song lyrics printed in the text followed by the stories behind the songs.