Lafcadio, the Lion Who Shot Back 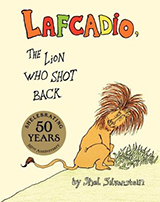 Originally published in 1963, Shel Silverstein’s Lafcadio, The Lion Who Shot Back is making a reappearance for a 50th anniversary edition. With the tale of Lafcadio, Silverstein’s captivating storytelling takes center stage. Unlike the author’s books of poetry, the story of Lafcadio is told in eleven chapters that take young readers on an adventure as Uncle Shel shares the history behind a unique friendship. Some lions may run from humans, but one lion doesn’t seem to fear people the way others do. Lafcadio’s bravery leads him through a series of interactions, for better or worse, with humans. Lafcadio blurs the line between being a lion and a human when fame and fortune come his way. He has adventures in the city, gains popularity, but there seems to be something missing from his life.

This adventurous classic tells the story of figuring out who you are and how choices affect a person—even if that person is a lion. For young readers, the story of Lafcadio poses questions and curiosities about living life to its fullest, while owning one’s responsibilities. The moral of the story is balanced out with simple but endearing illustrations and witty narrative.