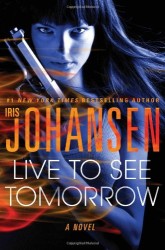 Catherine Ling grew up on the streets of Hong Kong and was found and mentored by a brilliant and dangerous man named Hu Chang. While still in her teens, she was recruited by the CIA and became a top operative. Even though she wanted to be home in Kentucky building a relationship with her recently returned son, when she perceived a threat to Hu Chang she acted to keep him safe by accepting an assignment in Tibet. If she refused the job, Hu Chang insisted he would go instead to rescue an American journalist who had been kidnapped by a warlord. The journalist was being tortured for information about rumors of a hidden city of gold and jewels.

During the time she fought to rescue the journalist, she became entangled with a mysterious man named Cameron who stepped in to help. He also wanted the kidnapped woman freed, and aided in getting them out of the mountains. But even as they scrambled to get out of Tibet, the threats to their safety intensified. While fighting her attraction to Cameron, Catherine must protect not only herself and the journalist, but her son and Hu Chang, who defied her wishes and travelled to Tibet to help.

From the beginning, the story draws the reader into this imaginative and fantastic tale of secret societies, crackling romance, and intrigue.