Memorial: A Version of Homer’s Iliad 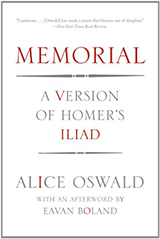 Rather than seeking to retell the classic story by Homer, British poet Alice Oswald seeks to capture the mood of the story by writing poetry about life, love, and war in Memorial, A Version of Homer’s Iliad. This book reflects on the Iliad which told the story of the war against Troy and Greece. The war was caused by the adulterous relationship between Paris and Helen, who at the time was married to a Greek soldier. As Helen and Paris ran away to Troy, many of the Gods took sides as the nation took arms against Troy for stealing Helen.

Eavan Boland, who writes the Afterwards to this book, argues the poem is “enargeia” or a “bright unbearable reality”. The book could also be called an “oral cemetery”. Interestingly, Oswald in meter follows the faith of 100 soldiers who perish in her telling. Although it’s not really a fitting tribute to those who have died, Oswald remembers the common soldier. While reading from Memorial, A Version of Homer’s Iliad the poetry is “always adapting itself to a new audience”. The poetry can be for those who hear the drums of war, but maybe also for those who hear the beat of a different drummer.