Taking Liberties: Why Religious Freedom Doesn’t Give You the Right to Tell Other People What to Do 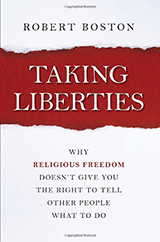 It’s in the news: Hobby Lobby’s owners say that it is a violation of their religious freedom to include birth control in the insurance coverage supplied to their employees. Some Christian bakers, photographers, etc. who cater to weddings are refusing to make their product available to same sex couples, and they have their political allies attempting to pass laws to allow discrimination on the basis of religious belief. Are they really concerned about their spiritual health, or is it “special pleading” for their bottom line. And, should we care? James Madison said “We are right to take alarm at the first experiment on our liberties.”

The author suggests that it is not only the government that we should be concerned with but also organized religion, as it has lost much of its control over our lives and is rallying to stop the slide and, indeed, to reverse it. The author’s view of religious rights vs. the secular view boils down to, “you’re a bakery, make the cake, what’s the big deal?”

When I was young, you could forget shopping on a Sunday – it was prohibited by the “blue laws.” Later, if I wanted a condom, I had to ask the pharmacist. You might think these are good things, and that’s okay for you, but the thrust of legal and commercial opinion is that these religiously inspired former laws should have no force in today’s society. It is now up to the worst Supreme Court in recent history to agree or not.

Mr. Boston is the director of communication for Americans United for Separation of Church and State. He is in agreement with several of the founding fathers who stated that religious liberty is, first and foremost, the right to make decisions for yourself (italics in the original). The Author narrows it down to: where you worship, how you worship, who you worship with, and whether you worship at all.

This thin analysis proves to be the only problem with the book. I think that most Americans take the broader view and may be put off by the narrow interpretation. That being said, there’s much food for thought here, and reading the book will arm you with the facts, whatever you decide.