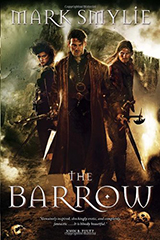 Mark Smylie’s The Barrow begins with a simple plot: a ragtag group of adventurers seeking buried treasure. However, things quickly become more complicated when they discover a cursed map that they believe will lead them to a lost and buried magical sword of legend. A collection of scoundrels, an exiled mage, and a collection of knights join forces to hunt for the Barrow with pursuit from several agencies close on their heels.

“Ah, young impressionable Erim. Things are never what they seem. Never get distracted by the obvious bright bauble.”

The Barrow is a dark, epic fantasy full of magic, curses, violence, and sex. The characters in the book are not heroes, nor are they by any stretch of imagination the classic trope of “knights in shining armor” so often found within your typical epic fantasy novel. They are greedy, self-absorbed, and often have ulterior motives which helps make this book so entertaining. This is a world where everyone is hiding something, and trust is hard to come by. The Barrow also functions as a sort of prequel for the Artesia graphic novel series, and as such is full of history and world building. Certainly not a book for everyone, The Barrow offers something dark and gritty woven around the traditional treasure hunting trope.