The Haunted Life: and Other Writings 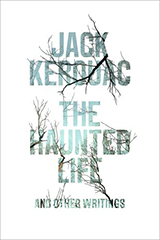 The Haunted Life And Other Stories by Jack Kerouac is a misleading title. The Haunted Life is the draft of part one of what Kerouac intended to be a series of books, the saga of the Martin family based on his real-life friend Sebastian Sampas, who lost his life while serving overseas as a US Army medic. The manuscript was lost, resurfaced years later and then lost again by Kerouac. All that remains is part one of the first book, the beginning of Peter Martin’s coming-of-age story.

“Although the early prose of The Haunted Life may lack the edgy charisma and experimental abandon of works such as On the Road and Doctor Sax, it nevertheless provides an important window into the intellect and intentions of the aspiring artist as he made his way toward the crafted prose of 1950’s The Town and the City.”

The story consists primarily of philosophical disputes Martin has with his friends, the leftist-idealist and poet Garabed Tourian, romantic wanderer Dick Sheffield, and his right-wing, bigoted father Joe Martin, a character based off Kerouac’s own father. The other stories referred to in the title are actually sketches for the rest of the saga, reflections, and pieces written by Kerouac’s father. The Haunted Life is a good choice for anyone who wants a deeper understanding of Kerouac’s work.