The Legacy of John Holt: A Man Who Genuinely Understood, Trusted, and Respected Children 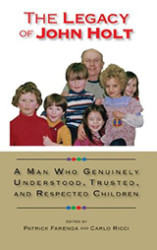 This is a disquieting book, compelling but troubling. It must be a commemorative tribute to John Holt who died in 1985, which will be 30 years ago in 2015. A few fairly minor adjustments would be beneficial.

First, many of us had never heard of John Holt. No doubt his reputation remains strong and positive among educators and parents seeking a new and better system of teaching children, but readers who need an introduction will not find one at the beginning, where it belongs. An introductory paragraph or two about the man, his philosophy and his life work would be a good start. And a page or two elicited from his writings would not be out of place.

Next, I’d suggest turning around the book’s organization. Accolades from various individuals would be more effective if the professional supporters got their words in first. Perhaps the Kasemans should start the ball rolling as their contribution is especially articulate and inclusive. The tributes from those who knew him when they were children or early in their careers could be interspersed with the professional pieces rather than set as a consecutive block.

There is a ‘warts and all’ undercurrent present among the personal tributes hinting or admitting he was contradictory. For example, he dined with the families he knew but never picked up the tab. Later, an advocate of ‘it’s never too late,’ he learned to play the cello and preferred travel by train rather than air so he could play his collapsible instrument while journeying.

Reading closely, it appears that Holt was a social misfit from an early age. He was know for rebelling against education to the extent that he was reluctant to admit whether or not he attended high school or college. This led him to be an advocate for alternative schools and later home schooling or un-schooling. He developed and crystallized his philosophy and theories in both his practice and writing.

He acknowledged that his affection for children, observing them closely at play in the park and so on, could be misinterpreted and he became cautious. Because he didn’t find the right person, he never married. But he was certainly revered by many.

One reviews a book with intent to pay special heed to the writing, the context, the style. But John Holt’s presence stands out so fiercely that one heeds his unfaltering preference for educating children outside the ‘regular’ schoolroom. Whether agreeing or not with the assertions he and his followers pursued, readers may notice that today children are not consulted about their preference for schooling and parents seemingly know best. This continues to contradict having respect for the young.

The book is unequivocally provocative and memorable.