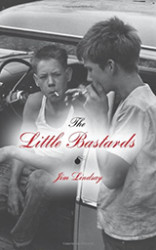 Did you or someone close to you grow up in the era of street drag racing, leather jackets and white t-shirts? In other words, the 1950s? Or have you read books or watched movies or TV shows about that time? If so, then you’ll understand a bit about the time period in which Jim Lindsay’s The Little Bastards is set. Sonny Mitchell is the narrator of a tale which begins on his 14th birthday in August 1954. He and his best friends live on the less fortunate side of the tracks in the fictional small town of Willamette, Oregon.

“Billy went on. ‘They’re just odd, like a bastard saw has an uncommon number of teeth which makes them different too.’
‘Kind of like us,’ said Joe. ‘We aren’t jocks and we aren’t brainiacs. We’re sort of in between.’
‘Yeah,’ I said, ‘we don’t fit in, like we don’t fit the mold. I guess we are little bastards.’
So that’s what we called ourselves. The Little Bastards. Among ourselves at first and then the word got out. And we became them.”

As the story opens, Sonny is adjusting the handlebars of his new bicycle. His friend Joe comes by to tell him there has been a train wreck with fatalities and if they are really quick getting there, they might get to see a dead body. The chase is on! They ride their bikes across town, swerving, skidding and dodging only to arrive at the scene as the ambulance and the hearse are leaving. They stick around to hear the police relate the details of the accident to a local reporter so they have the news to spread to the rest of their group of friends.

After that rash and reckless beginning, the adventures of Sonny and his friends continue. The youths are essentially respectful and polite, yet they do try to stretch limits as far as they can. Each adventure is another stepping stone on their path to adulthood. Author Jim Lindsay does not keep them from confrontation with authority figures or tragedy. The kids must deal with these issues while playing pranks, getting their educations and handling jobs. The book has a good balance of playfulness and seriousness. It is a lively, enjoyable novel about young men coming of age in small town America during the 1950s.