The Mayor of MacDougal Street 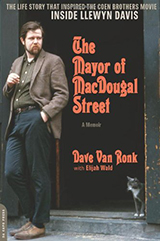 An Icon of the Folk Revival Looks Back

In a delightfully rambling hodgepodge of memoir, historical critique, and barroom tale, Dave Van Ronk’s spirited account of the “Great Folk Scare” is not only vital for its insight but a joy to read. Van Ronk, a foundational figure of the folk music revival of the 1960s, here demonstrates that he was not only a key participant but also a keen observer. Narrated by Van Ronk and given written form by collaborator Elijah Wald (who finished after Van Ronk’s death), the folk scene comes alive as free-flowing movement of innovation, tradition, and theft, in which “we all lived with our hands in each other’s pockets.”

“When the Folk Scare finally hit, it was bigger than even the most optimistic of us had imagined. All of a sudden, they were handing out major-label record contracts like they were coming in Cracker Jack Boxes, and there was money all over the place.”

Admirer of Pete Seeger, friend of Joanie Mitchell, and mentor to Bob Dylan, Van Ronk’s memories of these individuals are un-possessively frank and thoughtful—and often very funny. Politically active and self-educated in the social and musical movements of the past, his acute feel for the texture of the times picks apart the nuances of the musical movements that clustered under the suddenly lucrative banner of folk.

Van Ronk’s most recent fame has come by virtue of the Coen Brothers’ Inside Llewyn Davis, whose titular character he inspired. The movie’s story is Van Ronk’s, including the misguided hitchhiking trip to audition for Albert Grossman in Chicago and his performances at the Gaslight (“converted from a coal bin into an armpit”). But Van Ronk is hardly the gloomy Davis. Though his career bristles with many near-brushes at fame, ruefully recounted, the words with which he concludes his story beam forth throughout: “I wanted to be a musician, and I am a musician, and that’s what it’s all about.”