The Other Side of Paradise: Life in the New Cuba 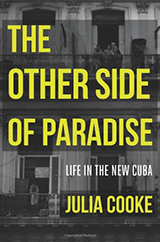 Julia Cooke writes about a place that many have never visited, but instead only wondered about whether the media has depicted truthfully – Cuba. The Other Side of Paradise chronicles Cooke’s time in Cuba attending the University of Havana and many subsequent visits and stays in the country. She meets a varied cast of characters and experiences the underbelly of Cuba. From renting a room illegally and street parties to bare shelves in grocery stores, Cooke’s experiences seem very realistic and humbling. She meets the average, ordinary citizen with hopes and dreams for the future, while dealing with the lack of money and everyday items we have come to expect. She chronicles a gay man that keeps himself at a distance so that when he finally leaves Cuba, he will not miss anyone, as well as a pregnant prostitute that cannot leave because she does not want to relinquish the only thing she owns – an apartment. She meets many people waiting for the ever-elusive visa. Crumbling facades of once-majestic buildings are everywhere. Although hopelessness could and should be pervasive, Cooke’s intimate stories of her five years there speak of bravery, dreams and a quest for a better future. When she visits again in 2013, situations have improved as the regime relaxes some of their policies; people can have businesses and own things. Cooke writes with honesty and simplicity and the reader gets a familiar view of everyday life; a life that is not so hopeless after all.