The Poor Man’s Guide to Suicide 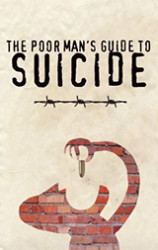 Wesley Weimer, the protagonist of Andrew Armacost’s book The Poor Man’s Guide to Suicide is going through a hard period in his life. He is divorced twice and has two children from different women. He is trying to be a good father. He pays alimony and every two weeks drives several hours to see his older daughter. He is only 33-years-old, but is already bald and depressed. Moreover, the feelings of being an outsider are increasing and he has thought about committing suicide. But he is a very considerate person. He wants to kill himself without disturbing anyone around him. To be courteous he considers doing it on the steps of funeral house wearing a diaper. Sounds hilarious? Maybe not. Wesley is a serious man. He has obtained a good life insurance policy and paid someone to kill him. How did he find the man? Simple…at work. Wesley is a prison guard.

“It seems to me that novels and films both tend to ignore or at least gloss over the great preponderance of Nothings that populate our decaying planet. I’m a Nothing.”

Readers may think this is an unusual place for the main character to work. But author Andrew Armacost is a former Corrections Officer and knows what he is writing about. The descriptions of Wesley’s shifts and prison routines are gripping. This is a rare opportunity to see prison life from a guard’s point of view. Wesley contemplates life and whines most of the time. For example, he thinks that most American prisoners are happier than he: a divorced, single, non-custodial father. He also thinks that Marxist’s ideas have been successful in the prison system since inmates have nothing to do or worry about (i.e. insurance, food or taxes). Sure, they are isolated, but in our world common people are often very lonely, too. Wesley is a knowledgeable man and mentions many famous names in his ponderings. This novel, with its unpredictable end, may remind Woody Allen fans that Wesley has fantasized a world of which he can be a part. As you finish the book, ask yourself if you feel empathy toward this once handsome and attractive man.