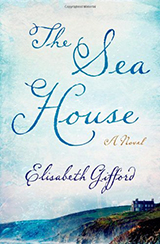 A Story of Those Haunted by the Past

Written by Elisabeth Gifford, The Sea House takes place in Scotland’s harsh Outer Hebrides and interweaves the stories of the inhabitants of the land who were haunted by their past. The story covers Alexander Ferguson in 1860, who settled in the town as the local Vicar to try to find proof of an evolutionary link between man and seal. During his journey, Alexander discovers his own family legends and at the same time his housemaid, Moira makes known that she cannot forget or forgive how her people were treated by the local gentry. Over a century later, Ruth and Michael purchase the now dilapidated Sea House and begin repairing it when Ruth’s pregnancy and the discovery of a mermaid child buried in the house force Ruth to face her troubled childhood.

As the storyline unravels, the plot cannot help but draw the reader in as each character speaks their own voice. Gifford is clearly a skilled writer and a master at exquisitely descriptive language. This novel is a joy to read.