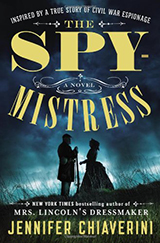 In the spring of 1861, Lizzie – an outspoken spinster and social progressive – finds herself in the Unionist minority when her native Virginia secedes to join the rebel Confederacy. Forced to hide her political sympathies or else be imprisoned or killed as a traitor, she spends the war years protecting Union prisoners held in Richmond and compiling intelligence gathered by her unconventional network of spies. Using bakers, gravediggers, prison guards and slaves, Lizzie becomes the primary source of Union army intelligence in Richmond, communicating directly with generals in the North to bring about the end of the war.

Jennifer Chiaverini’s expansive novel encompasses the entirety of the Civil War as lived by true-life heroine Elizabeth Van Lew, from the first shots fired through the rise of the Confederacy to the eventual assassination of President Abraham Lincoln. At times, the less-than-seamless introduction of major historical figures interrupts the otherwise fluid pace, but The Spymistress reads like a biography crossed with a spy novel. Readers will anticipate the landmark battles and final outcome of the Civil War, but the richly detailed narrative of The Spymistress puts a personal lens on this momentous period in history.