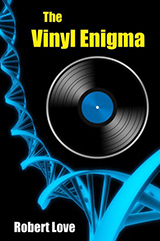 Engineering professor Evan Blake travels to London following a seemingly innocuous request from a friend. They discover a mysterious object buried under the London Eye and Evan finds himself the new owner of a vinyl record that somehow contains recordings of every live musical jazz performance throughout history. Evan tracks down the previous owner of the record and discovers that Nigel heard only classical performances during his period of ownership. Thus begins Evan’s quest to unravel the secrets of the alien object. Joining up with his friend and biochemistry professor Jeanette Menard, Evan delves deeper into the mysteries of the record, unaware of the growing danger. Word of the fantastic object has been leaked and Evan is now the target of a group of technological criminals, as well as a secret Russian government organization.

“Yet I believe the Record embodies something far beyond our ability to comprehend at this time.”

The concept behind The Vinyl Enigma is fascinating, as are the scientific discoveries Evan and Jeanette uncover during their time with the record. Author Robert Love’s familiarity with structural biology and nanotechnology shines through the narrative. Although it may not be completely necessary for the reader to understand all of the technicalities to get the gist of the narrative in these more technical parts, the large amount of scientific terminology may overwhelm some.

The strength of the manuscript lies in musical history and scientific information but the writing is rather weak when it comes to the characters and their relationships. The author can’t quite make the jump between writing technical jargon and depicting the necessary emotional attachments to make character relationships believable. While this isn’t a deal breaker, it can cause an emotional distance between the reader and the characters they are supposed to care about.

Full of science, musical history, kidnappings and a government cover-up, The Vinyl Enigma is an interesting book, particularly for those who enjoy music and have an appreciation for technologically driven science fiction.