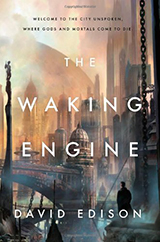 What Happens When We Die?

In The Waking Engine, Cooper wakes up in the City Unspoken, an ancient world where gods and mortals come to die. Cooper didn’t die, however, and could not have found his way to the City Unspoken without help from a powerful entity. Helped and hindered by his companions Asher and Sesstri, Cooper finds himself used as a pawn for numerous powerful figures. The careful balance of rebirth and true death that has existed for a millennia is coming undone. Cooper has been thrust onto the Shaman’s path in an effort to stop the svarning before the Last Gate closes and true death is stopped forever.

“We live and die, then wake somewhere new. We live on, die again, then wake once more. In a sense you’re right – it is a kind of prison sentence, and life will exhaust you at every opportunity. It’s a slow and painful way to travel, but that’s life: painful and slow. And very, very long.”

This is an incredibly complicated fantasy novel brimming with philosophical questions. While Cooper is guided at times through the narrative, he remains – as do the readers – confused and overwhelmed by the alien landscape in which he finds himself. The Waking Engine is not a book in which all the questions posed are answered, nor is the ending wrapped with a neat little bow. Often times the answers given only lead to more questions, making this book an intense experience. Not a book for casual fantasy readers, David Edison has created a hypnotically confusing adventure for his debut novel.