There is No End to This Slope 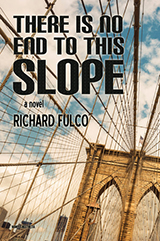 Grim and Grueling; Character and Plot

Three years: the time it takes for the protagonist of There is no End to This Slope to perform a downward spiral as complete as if he had a checklist. A melancholic textbook salesman in his late thirties, John Lenza drifts through life with vague aspirations of becoming a writer all the while plagued with guilt about the childhood death of his best friend and unrequited crush. When his marriage begins to crumble, he embraces the fall, plunging towards self-destruction.

“When life goes unimpeded, when things function properly and life is routine, healthy and productive– that’s when we are at our most dysfunctional. The funny thing about being sick is that I don’t remember a time when I wasn’t sick.”

Author Richard Fulco’s background is in playwriting (There is no End began as a play). While his dialogue has some spark, the rest of John’s narration reads like an extended voice-over. John’s grim honesty has a certain pull, but neither character, plot, nor prose is potent enough to prevent the book from slumping into tedium as John methodically dismantles his life.

Fiction is full of failed writers. One can often locate a certain smug catharsis behind this, as the actual (published) writers unload feelings of doubt and self-loathing upon their struggling alter egos. There is No End to This Slope never stops feeling like Fulco’s confessional exorcism, something that he needed to write but that we hardly need to read.