Thomas Cromwell: The Rise and Fall of Henry VIII’s Most Notorious Minister 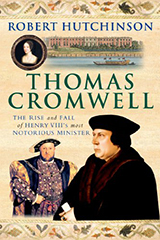 The Rise and Fall of a Political Dynasty

Robert Hutchinson’s biography takes on a figure the has recently re-emerged into notoriety, Thomas Cromwell. Thanks to Hilary Mantel’s bestselling Wolf Hall books, Cromwell and his position as the power behind Henry VII’s throne has once again captured public attention. Hutchinson neatly balances the more modern interest in the figure of Cromwell with strong research. This biography focuses on one aspect of Cromwell’s life and work in each chapter. Hutchinson assumes the reader has a basic knowledge of the Tudor era, and details many of the difficult changes in religion during that time. He presents extensive quotations in standardized English, however, which is helpful for readers who are not historical scholars and may find the non-standard spelling and grammar difficult. This book is historically accurate, but still accessible to the reader with only a casual interest in the period.