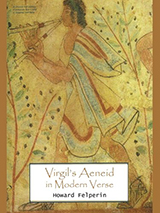 The Other Aeneid Translation

It is always a challenge to translate a classic, especially one that is nearly two thousand years old like Virgil’s Aeneid. The task is made even more difficult when the work itself is a sequel to an even more ancient and more popular work, in this case, Homer’s Iliad. The hero Aeneas, a minor character in the Iliad, escapes the Greek siege of Troy with a band of men and goes on a number of adventures throughout his journey, much like Ulysses in Homer’s Odyssey.

“I’m that same poet who once played his airs upon Pan’s simple pipes; then left the woods to spur the neighboring fields to spur the plough, a project grasping farmers dearly prized.”

Shakespearean and classicist Howard Felperin is extraordinarily ambitious in his new translation, Virgil’s Aeneid in Modern Verse. The effect is an odd mix of archaic tones, structures, ideas and phrases mixed with modern words like “bingo” and idioms such as “set up shop.” This version is best for academics and scholars who enjoy different interpretations of the Aeneid.