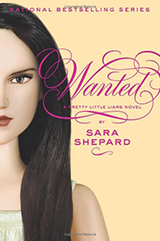 This reviewer absolutely loves the Pretty Little Liar television series, but has to admit she had never read one of the books before now. If you are in the market for a very well-written series reminiscent of a daytime soap opera and full of teenage angst, you’re in the right place. The series has blackmail, murder, seduction, lies, poor adult supervision, and all of the characters seem to have more money and more extravagant lifestyles than most grown adults! This reviewer found herself engrossed in this book and couldn’t put it down.

“He had all those photos of us, all those A notes…”

Though the blurb states that this book is the last in the series, this reviewer noticed that it is actually the tenth of fifteen, the rest of which are most likely equally enthralling. Sara Shepard has a talent for entertaining both teen and adult audiences without making her teenage characters appear too childish or annoying. This book was very enjoyable, and highly recommended.