When the Duke was Wicked 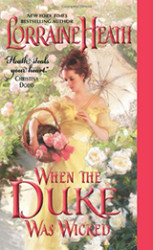 Devastated by the loss of his wife, the Duke of Lovingdon has spent years drowning himself in his vices. Nothing matters, not even pleasure, until Grace Mabry knocks on his bedchamber door. Calling upon their childhood friendship, Grace asks Lovingdon to lend his recent experience with sinning to her pursuit of a husband. Grace needs help identifying a suitor who will love her despite her sizable dowry and secret “imperfection.” When Lovingdon refuses, Grace resigns herself to another season spent doubting her suitors’ motivations, but ultimately her sincerity wins him over.

When the Duke Was Wicked unfolds as an unexpectedly moving story of love reclaimed. For Lovingdon, the unacceptable risk of love is the devastation of loss. Loving a woman again, especially a woman like Grace, could be more than his damaged heart can handle. Grace carries her own scars and hopes that love – even love lost too soon – will be worth whatever pain may follow.

Though the novel initially relies upon familiarity with characters from a previous series, When the Duke Was Wicked is independently enjoyable. Additionally, readers who have lived with cancer or have an interest in medical history will appreciate the glimpse of historical diagnosis and treatment of cancer. Lovable characters, memorable dialogue, and an expertly crafted storyline make this a satisfying and promising introduction to Heath’s newest series.