A Case for Old Spies 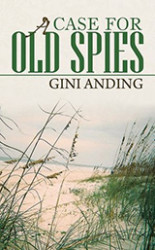 A Case for Old Spies is an intriguing look at what can happen when retired spies come out of retirement for one last mission. In keeping with the premise the reader is integrated in spying techniques of old with clandestine meetings, people coming back from the dead, mysterious ciphers that take the entire book to solve and intricate networks of contacts. These retired spies wonder what mission could be so important that they are called upon to finish it when they’ve been out of the business for decades, and the answer isn’t an easy one. With multiple layers and at least three missions running at once the reader is in for a roller coaster ride of mystery, danger and a little history.

“No one in the room had answers. While the three former spies recognized that they were again involved in a need-to-know situation, this time they were uncomfortable with their roles in the spy game.”

Some readers will find it challenging to delve into the book and get to know the characters because 18 characters are introduced within the first three chapters. While not all of the characters play a large role in the story they are all mentioned throughout the plot. It can take a while for a reader to keep all the characters separate in their mind as they read because some of the smaller characters do not have a unique voice. Speech patterns and dialog are similar for some people. In addition some of the names of the main characters sound similar, i.e. Zach and Jack, and when those two characters are first introduced and are talking to one another it can be hard to keep them as separate entities.

That being said, the actual mystery will draw the reader in like a moth to a flame. Gini Anding weaves a tale that will have the reader guessing until the last six pages. Every piece of information is carefully released to answer one question about the mission but also creates additional questions even for the main characters. Creating a mystery spanning at least six countries, multiple languages, and a short history lesson of Europe, the United States, and the Middle East during the Cold War is no easy feat. However, Anding does it all while keeping her characters (and the readers) in the dark.

A Case for Old Spies incorporates history, espionage, and a band of retirees in a story that will leave the reader wondering. In clandestine black-ops fashion the world never gets the full story, however that is its best part. In staying true to the world of spying, the world is a safer place but the details of the operation are “need-to-know.” For readers that are interested in a mystery that needs more than a GPS and some high-tech gadgets to unravel the plot, A Case for Old Spies is the book.