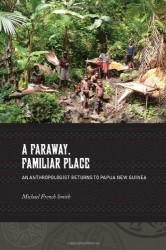 A Faraway, Familiar Place: An Anthropologist Returns to Papua New Guinea tells the story of an anthropologist returning to Papua New Guinea after many years absence. He finds the place he lived and worked much changed, as well as that he himself as changed in the intervening years, and is no longer the charge-ahead, near-sighted youth he was when he first researched there.

“I also had started to feel the press of time in my own life.”

It’s very much the story of people, as one might except from an anthropologist, from his relationship with his wife and her failure to thrive in PNG, to the people of PNG and their lives intersecting with his research. It’s also very much about what people can learn from PNG, namely the art of slowing down, of paying attention, a habit that has been lost in many parts of the world.

One could call this book a leisurely travelogue, a book that explores what being “modern” means, from the perspective found on muddy roads, stifling heat, and other jungle discomforts. Michael French Smith’s work is very academic in nature, as might be expected. So readers will want to be prepared for that, but overall the book is an interesting account of PNG.