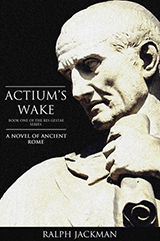 Intrigue and Adventure at the Dawn of the Roman Empire

Actium’s Wake is the story of Marcus Rutilius Crispus, Roman Senator and soldier, and his adventures in the wake of the battle of Actium. Actium is where Marc Anthony and Cleopatra escaped from Augustus and dragged the Roman Empire into further civil war. The city was a sure bet until a ship broke the battle lines. Unfortunately, that ship belonged to the narrator. So begins his long downward spiral. Marcus goes bankrupt as he tries to repay Augustus for his mistake. He promises money he doesn’t have to an informant to try to regain his place. When he cannot pay, the informant murders Marcus’ beloved young wife.

These misfortunes are simply the beginning. Readers will accompany Marcus to the battle of Alexandria, will witness the deaths of Anthony and Cleopatra and will return with him back to Rome. The novel is written as a first person account, with faux historical footnotes about the authenticity or provenance of various letters inserted into the text. This veneer of historical fact could have been dispensed with, but is easily disregarded, and most readers will appreciate this book more as a Dan Brown-style historical thriller. The author has obviously done his research, and the Rome evoked in the text seems like a real place. The action takes place against a number of richly imagined backgrounds. Due to the first person format, the reader starts the story with no context. For that reason, the beginning of the novel can be a bit slow. But the intrigue quickly picks up and sweeps the reader to the end of the 278 page novel.