At the End of Meadow Street 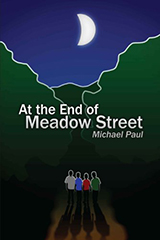 It doesn’t matter what country or city you’re growing up in: it’s always difficult and turbulent. Although each person has his own problems, this process is both different and similar for everyone. In At the End of Meadow Street Michael Paul tells an appealing growing up story of four twelve-year-old boys from different backgrounds: rich and poor, black and white. The story begins on the last day of sixth grade and is narrated by Sam Johns, the smallest of the four. Although Sam is frustrated by his first girlfriend, it doesn’t prevent him from participating in the group’s last school and first summer prank. They make a smoke bomb and accidentally burn their school’s kickball field.

“It had been time for them to transform into something else and enter a new stage of life.”

Many other dangerous pranks and games follow during this unforgettable summer of 1986. The boys, overflowing with pent up energy, spend their time doing many stupid things that they think make them manly men. They smoke and drink, compete with and insult each other, girls and other boys. Reading Sam’s honest account of their adventures and his own physical and psychological problems is captivating. The author provides a town map drawn on school notebook paper in the beginning of the novel so readers can follow Sam’s journeys. Such visualization makes it possible to see Sam’s habitual world and how it changes though his eyes. The detailed descriptions of Sam’s feelings of fear, anger and insecurity allow readers to understand and empathize with him.

The eighteen years of Michael Paul’s labor has produced a juicy and delicious result. Both adults and teens will enjoy reading this book. To adults it will bring back nostalgic memories about their own youth. Parents and teens will find a handful of food for thought.