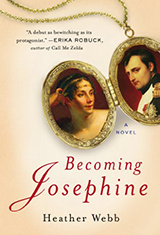 A Rose by Another Name

Becoming Josephine, a brilliant debut novel by Heather Webb is a sympathetic depiction of one of history’s most remarkable women: Rose Tascher Beauharnais aka Josephine Bonaparte. Ms. Webb chose to imbue a story so richly documented by letters and political notes with Josephine’s own voice in order to give the dry detail a bit of the melodrama that must have been characteristic of Josephine. For most of the novel she knew herself simply as Rose. Rose was never simple. Rose Tascher was a head strong young creole, raised on the isle of Martinique who was the default choice to be sent to France to make a prosperous marriage. Rose Beauharnais was then the wife of an Assembly President of the Revolutionary Republic, a mother, an advocate, a prisoner, a divorcee, a widow and a consort of powerful government men. By the time she had met Napoleon, who she referred to as an “odd little man”, she had lived a full and rich life of influence. She had survived a slave uprising, poverty, and revolution. She encouraged his addresses out of inborn politeness and as a favor to a friend. It was only after her marriage and distance that she discovered true regard for her unkempt General. She was “reborn” as Josephine Bonaparte upon marrying Napoleon, who wanted “to possess the true [her], yet untouched”. Through affaires, poetry, long military absences, losses, disapproving in-laws, and a remarkable political rise, their love endured. Napoleon was depicted as a determined, superstitious, volatile man yearning for approval. Complimentary, Josephine was emotional, empathetic and loyal. Her driving desire was always to gain a foothold of stability in the unstable world she resided in. From the glittering world of aristocratic France, to the Prisons of La Terreur, to the Palace of Napoleon’s Empire, each exquisite detail marked the passionate existence of a woman who was larger than life. With the completion of this book Ms. Webb has made her name as a novelist and historian.