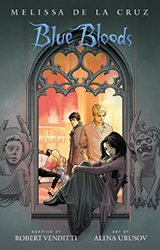 Judging by the ever-expanding group of fans devoted to the work of author Melissa de la Cruz, anything she writes becomes an instant hit. Her fantastic Blue Bloods series is no exception. With the nine-book series now complete, fans are searching for ways in which to enjoy their favorite Blue Bloods characters and plots. In Blue Bloods: The Graphic Novel, author Robert Venditti has taken the first book in de la Cruz’s best selling series and has created a stunning graphic novel adaptation.

Fans familiar with de la Cruz’s work will thoroughly enjoy seeing visual representations of the people and places that exist in the secretive world of the Blue Bloods. Readers new to the series will get a broad introduction to the characters and a basic understanding of the plot, all while immersing themselves in the vivid artwork of Alina Urusov. If reading the graphic novel is your first peek into the mysterious, thrilling lives of the group of elite, sexy, blood-hungry New York teens who call themselves the Blue Bloods, you’ll likely want to find out more. Luckily Melissa de la Cruz has a whole series for you to explore.