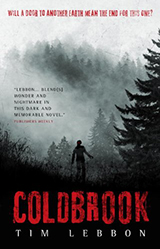 Tim Lebbon’s Coldbrook begins with a scientific experiment that accidentally brings about the end of life as we know it. When a creature crosses the man-made breach between alternate realities, it unleashes a devastating plague that infects its victims within seconds. Mankind’s only hope rests with the few surviving scientists from the Coldbrook facility, and one young woman with a debilitating genetic disorder.

“He was doing something to the door control, sweat patches spreading from beneath his arms and across his back, and she thought, No, Satpal, we can’t let them out. He glanced back, caught her eye and then looked beyond and behind her, His eyes opened wide.”

While on the surface Coldbrook might seem like a stereotypical zombie novel, this book has quite a lot going for it. Tim Lebbon’s writing is hypnotic and makes it difficult to put the book down. The book focuses more on the psychological effects on the survivors and the implications of multiple realities in which the same plague is occurring, and less on the violence and gore inherent in zombie outbreaks. Most of the main characters are scientists, which adds a different perspective from most zombie novels that focus instead on the “everyman” archetype. The book is surprisingly thought-provoking, and fans of horror and those who are looking for a different spin on the zombie genre will enjoy all that Coldbrook has to offer.